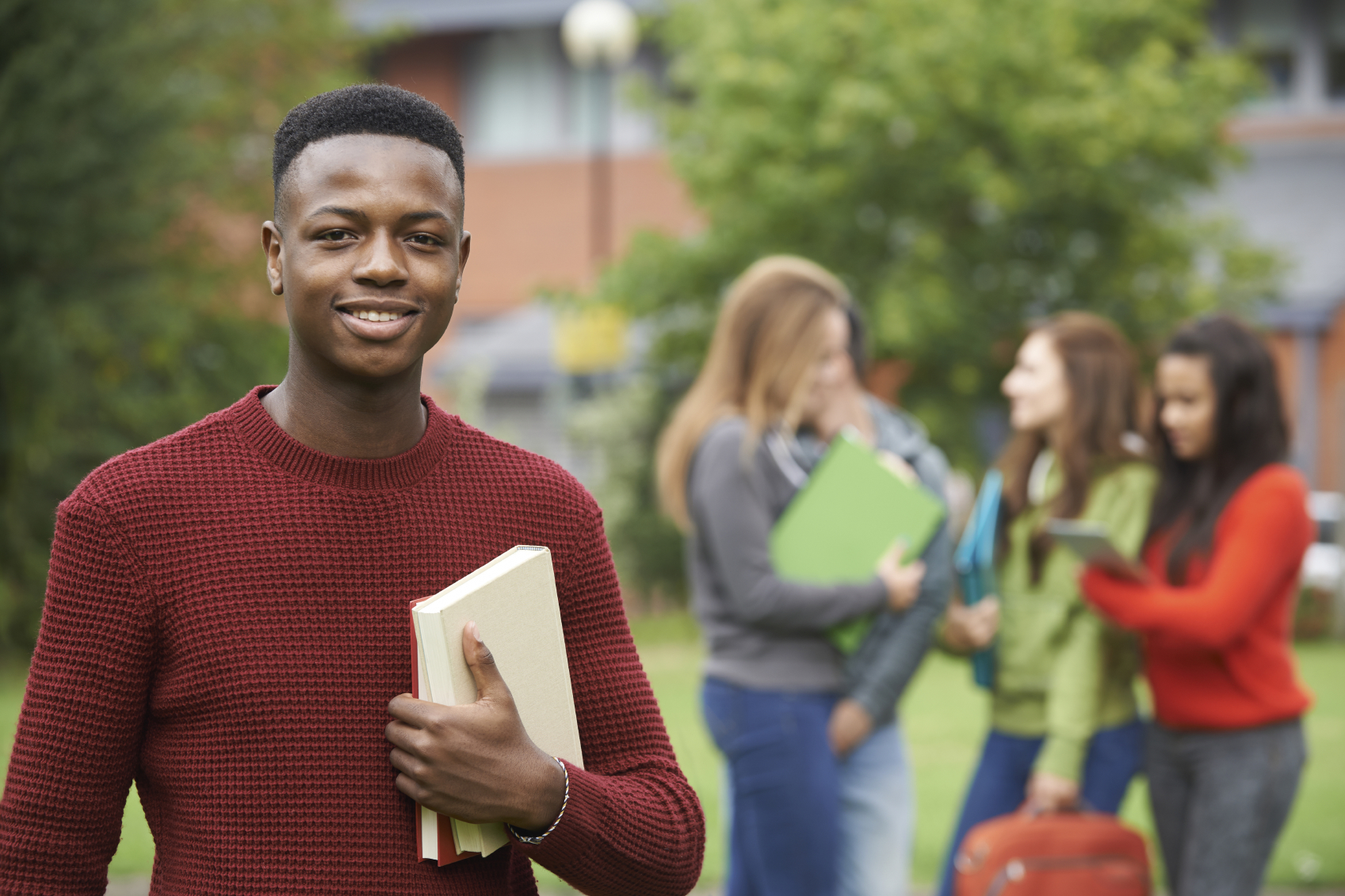 Being a black student at a higher education institution where the white race is dominant among students and staff is not easy. And though the times when citizens of black community were excluded from society and had little opportunities to get accepted at universities are long gone, many students consider themselves not strong enough to face the still existing prejudices and stigmas in these institutions.

The road to there, might seem even more difficult and challenging. The very expensive fees many times are a great factor for high schoolers to remove the opportunity to continue studies, or even drop out later.

However, aside from the fact that people who have completed higher education are more likely to get high paid jobs, studies show that regardless of race, this group of people has many more advantages in life. College graduates are more likely to experience job satisfaction rather than non-degree holders. They are also more careful with their health, better citizens, and happier in comparison to those who did not obtain a degree.

The road to a graduate or professional degree has many challenges for black students, and sometimes it might seem scary and impossible. However, in the century we are living all American and European Universities and Colleges accept black students as equal to any other race, though prejudices and stigma still exist among individuals in these institutions.

According to a report of the US Department of Education published in 2015, college access for Black Students in the United States has increased from 11.7 percent to 14.5 percent from 2000 to 2014. Still, the racial gap between Black and White students who obtain their college degree is unacceptably large.

There is a significant amount of opportunities available for black students at many universities around the world.

Decide what you wish to study

The first step to take towards a higher education is to decide what do you want to work in the future. The process might seem easy, but actually it is the most important. Every other step depends on this one. When taking this decision, which most probably will be the base of one’s professional life, one should take into account a lot of things.

Ask yourself: Am I good at doing this? Does it fit me as a profession? Is this a degree in demand? What types of jobs can I do with this degree? How much am I likely to get a job after graduation? How much will I be able to have an impact to improve life in my community?

Deciding what you want to study is the root of everything. Once you have decided then you can continue by taking the next step, which is deciding at what higher education institution you want to study.

Depending on what you wish to study and other factors, you have a few choices.

1. Junior or Community College
At a junior or community college one can obtain a certification or an associate’s degree. Usually the degree has 60 credits if attended full-time for two years, or part-time within 4 years. After completing it, many students continue at four year colleges or universities.

2. Four-year Colleges and Universities
These are traditional colleges and universities where one can receive a four-year bachelor’s degree, master’s degree and a doctorate degree. These institutions offer diverse courses and majors. There are both public and private universities, the difference between which is that the former are funded by the state what makes them more affordable.

3. Online Colleges
Online degree programs are a great opportunity for those who need flexible classes, since they allow students to complete coursework online. Students are also permitted to take as many or as few classes as they wish at a given time.

4. Career – Specific Colleges
Career colleges are an excellent option for those who wish to receive specific training in a trade or technical skill. Here they can complete training in accelerated programs and start their careers more quickly than they could at a traditional four-year college.

5. Religious Affiliated Schools
These are schools that are funded by religious institutions, very similar to traditional four-year universities. They often fuse religious beliefs into their students’ social or academic life.

6. Military Academies
These are colleges which offer college degrees with an emphasis on military discipline and may be either government-funded or privately funded. Through students at these institutions enjoy the benefit of not having to pay any tuition, they are highly selective and have a lot of requirements. They also take in a very limited number of students.

Today, the United States count 101 HBCUs, including public and private institutions. However, during the 1930s there were 121 institutions of this kind. 27 of these institutions offer doctoral programs and 52 provide master’s programs. 83 of them grant their students with a bachelor’s degree and 38 other offer associate degrees. Though they primarily were established to offer higher education to black students today they do, however, admit students of all races.

The US News ranked the quality of undergraduate education at historically best black colleges and universities, which are currently listed as HBCU by the US department of Education. The top ten best are as follows:

A private institution founded in 1881, located in Atlanta. It is the oldest historically black college for women in America. It has a total undergraduate enrollment of 2,125, and its tuition and fees are $28,181 per year.

A private institution in the heart of the District of Columbia, founded in 1867. Its tuition and fees are $25,697 per year. The school offers a range of male, female and coed housing, both on and off campus.

A private institution founded in 1868. It has a total undergraduate enrollment of 3,836. It’s tuition and fees cost $25,442 per year and it has more than 80 undergraduate and graduate programs, including master’s programs in health and physics.

A private all-male institution founded in 1867 in Atlanta. It has a total undergraduate enrollment of 2,108 and its tuition and fees are $27,278 per year.

A public institution founded in 1887 in Tallahassee, Florida. It has a total undergraduate enrollment of 7,769, and its in-state tuition and fees are $5,785 per year, while the out-of-state tuition and fees are $17,725 per year. The university offers about 60 bachelor’s degrees in a wide range of studies, with architecture, journalism and psychology among other undergraduate majors.

A private institution founded in 1881 located in the city of Tuskegee, Alabama. Its tuition and fees are $22,235 per year. Its campus is the only university campus of a historically black college in the nation to be designated a National Historic Site.

A private institution founded in 1866, in Nashville, Tennessee. It has a total undergraduate enrollment of 723 and its tuition and fees are $21,480 per year.

Higher education can be very expensive. No matter of much you have saved during your high school, it is very hard to cover all expenses. However, there are a lot of ways to pay for your education, even if you are not very rich.

Scholarships are just one of the ways. There are hundreds of scholarships for Black students around the world from which one can benefit by applying and fulfilling the necessary requirements. African Americans have more opportunities in this regard, where many scholarships are awarded by local organizations, private companies, societies and more.

Each higher education institutions and each scholarship have their own requirements. In general, most of them ask for:

Every institution and scholarship appoints a minimum GPA, and a minimum test score. The number of the recommendations and the subject of the essay. Each of them might have extra requirements as voluntary experience, participation in sports, etc. Therefore, before applying, take care to look carefully if you fulfill the requirements.

Most of them open annually, but not necessarily. Some scholarships require you to be enrolled at a university and others don’t. Follow the websites of these scholarships, or regularly check opportunity portals, so you will not lose the deadlines.

To many students the process of getting into a university might seem very hard, but to others the hard part begins when classes start. Especially if you are the only one, or one among very few black students in your class, though classes at university nowadays are very mixed in general. One way of getting acclimated to the new environment is by getting involved in student organizations.

The main mission of these groups is to provide services and programs that address the needs and concerns of all students of African and African-American descent. To promote unity throughout the African American community and to stimulate intellectual, political and social growth amongst them.
These groups might sponsor cultural and social events, provide leadership opportunities in attempt to involve the community in its efforts to attain respect for cultural diversity and peaceful coexistence.

Joining one of these groups might help you fit in more easily and face the stress that juniors usually have to deal with, since most of the students’ part of it have probably gone through what you are going through at the beginning of this phase of your education.