The number of students enrolled in US universities has seen some ups and downs in recent years, according to the NCES statistics. However, the number of black students is not following the exact same pattern. Between 2011 and 2016 this category of students has experienced a drop of 16% which is pretty concerning.

At the time when higher education shareholders are committed to smooth out the race gap in equal participation in university, the US seemed to be struggling at this duty. The National Center for Statistics shows that the number of black students in US universities is falling at a worrying rate.

Corresponding to the NCES data, in 2011, there were 3,079,200 black students enrolled in US universities counting for 15.2% of the US student population at that time. Following that year, the number decreased in yearly basis until in 2016 dropped in 2,588,000 meaning a decrease of 16%.

As for the category of students aged between 24 and 34 the racial gap in enrollments in 2015 was smaller. In 2016, the year the NCES data for this group of students extends, black students, counted for 13.7% students. White students, on the other hand, amounted to 56.9%. Referring to these figures in 2011, black students accounted for 37.1% of the student population as opposed to 44.7% white students.

With this being said, white students still share the highest portion of college enrollments in the US. Though their number is also decreasing they still amount to more than half of the total number of students.

This falling trend of the number of black students is seen even in some of the best US universities, where higher racial equality standards would be expected. Last year a concern over black students’ being underrepresented in US top universities were raised. This translates into a serious task for the future of US colleges. 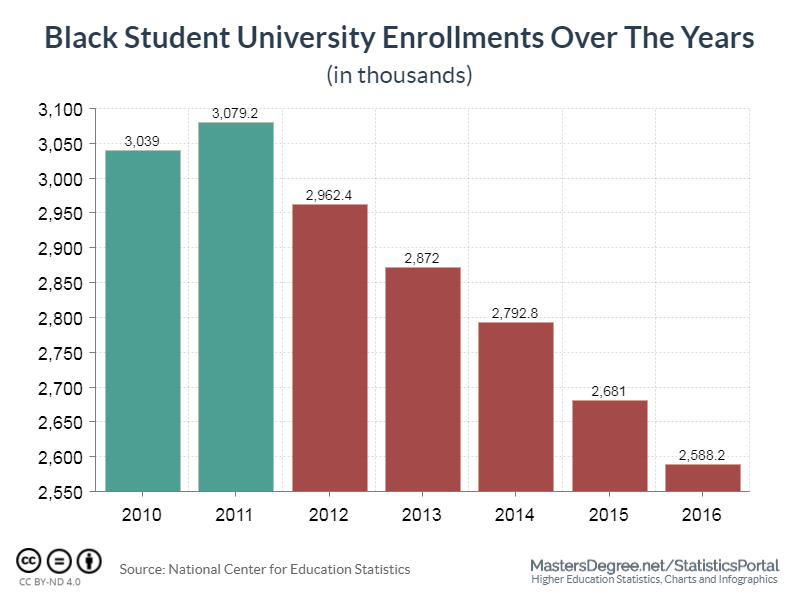